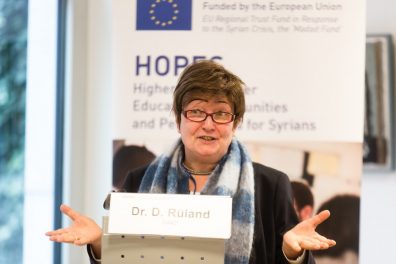 Before civil war broke out in Syria, more than 20% of 18-24 year-old Syrians were enrolled at university. Today, less than 5% of young Syrian refugees have access to tertiary education [1]. “Young people who are deprived of education are deprived of their future. We have to prevent these young people from growing up with a sense of hopelessness and uselessness that makes them more prone to extremism” said Dorothea Rüland, Secretary General of the DAAD, at an event organised by the DAAD and the European Commission on 31 January at the German Permanent Representation to the EU in Brussels. “Syria will need educated young people onceit becomes possible to rebuild the country. Investing in young people is an investment in the future.” 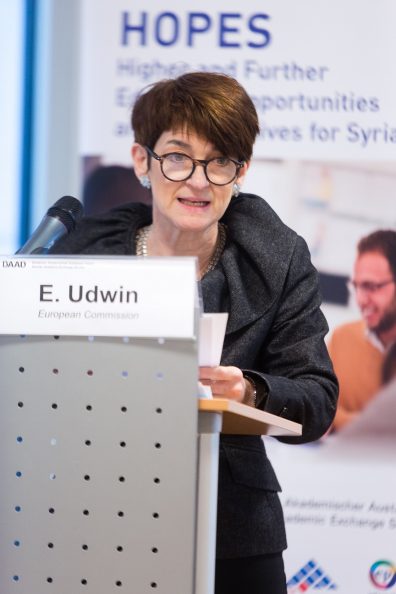 The event in Brussels presented the first results of the HOPES project – Higher and Further Education Opportunities and Perspectives for Syrians. Funded by the EU Regional Trust Fund in Response to the Syrian Crisis, the ‘Madad’ Fund, and implemented by the four European agencies DAAD, British Council, Campus France and EP-Nuffic, the project provides access to tertiary education for Syrian refugees in Jordan, Lebanon, Egypt, Iraq and Turkey. The project was officially launched in Brussels in May 2016; in January 2017 HOPES project director Carsten Walbiner was able to present its first results: 205 scholarships enabling Syrian students to start their university studies were awarded in 2016/2017. Demand, however, far exceeds the currently available support. In Turkey alone, HOPES, and its partners UNHCR and YTB received a record 13,500 applications. Participants at the event agreed that “we need to do much more”.

The EU regional trust fund in response to the Syrian crisis, the ‘Madad’ Fund, was set-up in December 2014 with an initial budget of 23 million euros. Contributions from the EU budget and from 22 EU member states have increased the current total volume to 932,45 million euros. The overall contribution of the EUTF will increase to EUR 1.3 billion by the end of 2017. Over a period of 20 months, action documents totalling 767 million euros have been adopted by the fund’s operational board to support primary and higher education, psycho-social care, resilience and livelihood initiatives, health, water and sanitary needs as well as the construction of schools. 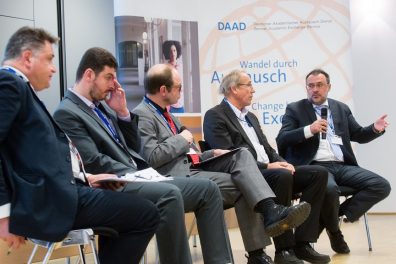 Around 50 million euros of this funding have been allocated to higher and further education. The fund is addressing longer-term resilience and early recovery needs of the Syrian refugee population and vulnerable host communities. “When discussions on the fund started, there was not much appetite for long-term investment”, explained the EU Trust Fund manager, Nadim Karkutli. “Unfortunately, we see today that this is needed; the Syrian crisis has not yet come to an end and we do not know when that will happen.” It will be of paramount importance to continue supporting Syrian refugees and in particular the young generation. The Madad Fund will require the support of the European Parliament and the EU member states for an extension beyond its current duration. University studies, for example, take a minimum of three years; the current fund only runs until 2019. 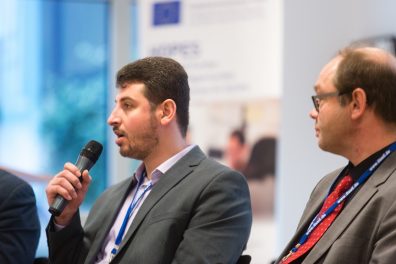 A video shown at the event portrayed three Syrian students who have (re)-started their education thanks to a HOPES scholarship. “We also need the scholarship holders as role models” explained Carsten Walbiner. “It is frustrating to see that some young Syrians give up their ambitions.” The challenges for Syrian students who want to take up studies in their host countries are numerous: funding (international students pay far more than domestic students), language, appropriate courses, recognition of previous studies and the capacity of host institutions that are often already overcrowded with domestic students – to name just a few. These challenges were discussed at a panel composed of representatives of the HOPES project, the DAAD, the Madad Fund, the European Parliament, a Syrian student and around 100 representatives of stakeholder organisations in the audience.

But the HOPES project allocates scholarships; it also provides counselling to Syrian students, offers language- and preparatory study courses as well as innovative education courses and supports coordination and exchange of information between education stakeholders in the region. The first regional HOPES conference will take place in May 2017 in Jordan.

An interview with HOPES programme director Dr. Carsten Walbiner (in German) is available on the DAAD website