In 2006 – France and the Netherlands had just rejected the Maastricht treaty – Europe was in a crisis. “A similar situation to the one we are experiencing today”, recalls Frank Wittmann, chairman of the German voluntary association “Europa macht Schule e.V.”. The association was founded 11 years ago after the former German federal president Horst Köhler gathered more than 100 young people to discuss the future of Europe at the students conference ‘What keeps Europe united?’. They came up with the programme idea “Europa macht Schule” (Europe meets School – EmS).The programme gives European exchange students the opportunity to present their country through a cultural project at a German school, thereby creating awareness of differences and generating interest in Europe amongst pupils and teachers. The programme was launched in Germany in 2006; since 2009 the DAAD has been coordinating and implementing it with funding from the German Federal Ministry of Education and Research.

Today in light of Brexit, rising populism and euroscepticism, Europe needs these kinds of programmes more than ever. Many young people take Europe for granted; they cannot recall a life without European achievements such as peace freedom or the freedom to travel, work and live in the place of their choice. “We have to join forces to show people how diverse and colourful but at the same time how fundamental Europe is for all of us” said Simone Flach from the German Federal Ministry of Education and Research at the European networking event “Promoting Europe, Cultural Exchange and Mobility. Europa macht Schule – Europe meets School” on 22-23 May 2017. At the invitation of the DAAD, 100 participants, including representatives of Erasmus+ National Agencies, students and interested organisations, from 13 different European countries came together at the representation of North-Rhine Westphalia (NRW) to the EU in Brussels. They discussed how to strengthen programmes such as EmS that promote Europe, cultural exchange and mobility. Sylvia Löhrmann, Minister for School and Further Education of the German federal state of North-Rhine Westphalia, called upon participants to contribute their ideas: “We need committed people and active citizens to build a new European society”.

The DAAD as the conference host,was pleasantly surprised by the number of programmes that exist in Europe and that, like ‘Europa macht Schule’, promote European values in schools, by using current and former exchange students and/or young people as ambassadors of the European idea. Ten programme initiatives from eight European countries were presented in a World Café session. Conference participants called for more synergies between these initiatives and advocated fostering mutual learning. In Lithuania, for example, the ministry identified schools with feeble or no international experience and placed them on the top of the list of places for exchange students to visit. The need to reach out to these schools and population groups was much debated among conference participants. Gerry O’ Sullivan from the Irish National Agency for Erasmus+ noted that “you are not born with prejudices, you learn them.”

In Germany, 200 projects are set up each year under the umbrella of EmS. Over the last ten years, around 40,000 pupils from all kinds of schools experienced the variety of European cultures, discussed stereotypes and thereby learned to better understand each other. As an example, three pupils from the Stadtgymnasium Detmold in NRW presented their project organised by Russian exchange student Anastasiia Volkova at the conference, showing that despite globalisation cultures and their traditions remain national, regional or local.

The participating in EmS has also been an enriching experience for about 1,700 European exchange students. Thibaut Jacques from France, who is studying in Germany and has completed an exchange to the Czech Republic, explained what motvated him to take part in EmS at the panel discussion: “I am European. This programme looked like me. Pupils may learn the dates of the European integration process in school, but I wanted to teach them the feeling of Europe, through a hands-on experience.” At a German school Thibaut carried out a project on Franco-German relations in the past (illustrated by the World War I battle of Verdun) and the present.

In order to ensure greater sustainability of ‘Europa macht Schule’ the DAAD and the association are implementing EMS seminars at various German universities. Currently, students can earn ECTS credits for their involvement in EmS activities at three pilot universities.

Conference participants called for more activities like EmS in Europe and discussed how to best guarantee sustainability, financial support and a broad geographical reach. One possibility could be the integration of such activities into the European Union’s education programme Erasmus+ or its successor programme. Who should support these activities if not the European Union? Although young people should remain at the centre of such bottom-up activities, “institutional support is needed to multiply these activities and to sustain them in the long run”, explained Frank Wittmann from EmS e.V. Vanessa Debiais-Sainton, deputy head of the Unit for Higher Education at the Directorate for Education and Culture at the European Commission invited participants to take part in the Commission’s public consultation on Erasmus+; it collects recommendations on the programme’s implementation as well as its future development. She underlined that programme activities, such as EmS fit well into the EU priorities that are, for example outlined in the Paris Declaration.

At the end of the first day’s discussions, participants gathered to demonstrate their support for Europe and to take part in the DAAD social media campaign#Europabewegen / #MovingEurope. Balloons sent flying into the Brussels sky symbolised new ideas and developments for Europe;  as Hanns Sylvester, former director of the National Agency for EU Higher Education Cooperation, Erasmus+ in the DAAD put it, “Moving Europe – because Europe is our future”. 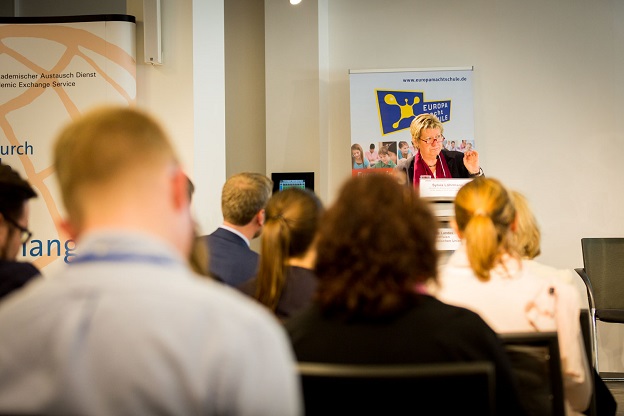