The session addressed this question through feedback from various stakeholders and focused on the following issues: how HEIs in Europe and Africa can support entrepreneurship for young graduates and alumni; means of fostering links between HEIs and the private sector in Africa; the results of certain initiatives implemented so far including EU-funded programmes. 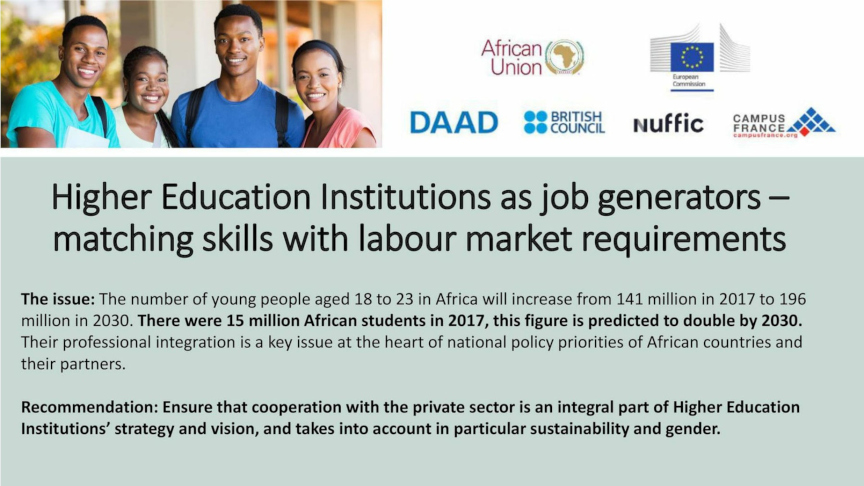 You can find the recommendations in detail here:

Speakers at the Workshop:

Prof. Mady KOANDA is Associate Professor in Management Sciences, holds a PhD in Management Sciences and a PhD in Analysis and Economic Policy from the University of Poitiers. Currently Director General of the Institute 2iE he has a rich academic and scientific experience, as evidenced by the many functions and responsibilities he has held. Indeed, Prof. Mady KOANDA held the post of General Manager of the African Center for Higher Studies in Management (CESAG) based in Dakar from 2005 to 2010. Head of the Business School of 2iE, Project Manager CLEAR and Head of Management Department of the University of Ouagadougou. Member of the Board of Directors or governance bodies of many institutions.

He has to his credit, more than twenty scientific publications especially in finance and he has carried out several teaching missions in Africa and Europe.

Jean-Luc joined the FMFP after 19-years as Human Resource Director in International companies in Madagascar in various sectors: Mining (Rio Tinto), Telecommunication (Orange), Banking, Harbour, Energy, Building & Construction, Food and Beverage. Jean-Luc is a part-time professor in University and management school (Vatel, CNAM…) in Madagascar and used to be the President of the Malagasy Association of Human Resource Director from 2016 to 2018.

« My background allowed me to realize the mismatch between training and the job. This mismatch impact most sector in Madagascar. One job out of three is not filled because of know how mismatch Vs the job requirement in the market»

The Malagasy Fund for Vocational training joined in March 2019 the large family of 70 training funds that exist around the world. The Malagasy fund is nevertheless the most « avant-garde »: its private and joint gouvernance; its missions (Vocational, Pre-employement and Equité Training) and its sector orientation are the hallmarks of the Malagasy Fund.

Bertrand Commelin was appointed Director of European and International Development of Le CNAM in May 2019. Prior to this position he was the Secretary General of the Alliance Française Foundation headquartered in Paris (2015-2019).

Bertrand Commelin graduated with a Bachelor’s and a Master’s degree in Economics from Sciences Po Paris, and holds the « Agrégation » national teaching qualification in Social Sciences. After a two-year assignment as professor of social and economic sciences in Tunis, he returned to Sciences Po in Paris as Associate Professor of Economics and head of the Communications department.

In 2007, he was named Director of External Affairs of Nestlé Waters France Belgium. Returning to Morocco in 2010 as Counselor for Cooperation and Cultural Affairs at the French Embassy, he founded and headed the Institut Français in Morocco, which gathers thirteen French cultural institutes across the country. After he went back to Paris in 2013, he was named consecutively Director of Sorbonne Universités, and Deputy Director of the Centre International d’Etudes Pédagogiques (CIEP). 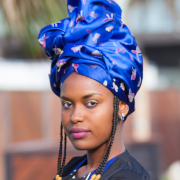 Siny Samba graduated as a food processing engineer from Montpellier SupAgro, a renowned French school in the field. Her choice of study allowed her to combine her passions and hobbies, among which cooking and helping children from her native Senegal. After her studies, she began working at France’s leading infant nutrition company, which gave her the opportunity to develop her expertise in this field. Her willingness and drive to contribute to her own country’s development inspired her to make the brave move of setting up her own company entliled « LE LIONCEAU », her Senegal-based company specialising in the production of food for babies. The company’s policy is to improve the nutritional status of young children with natural and high quality nutritional products. In additional, the company enhances the value food chain by collaborating with local famers. Convinced that health comes from food, Siny conducts awareness and education campaigns on the importance of the first 1000 days of a child and on infant and maternal nutrition.

Holding a post-graduate degree in Management from Panthéon-Sorbonne University, Jean-Michel Nicolle graduated from the Institute of Business Administration of Paris and was certified French public accountant.

In 1984, he joined the National Institute of Economics and Accounting Techniques (INTEC) of the CNAM, and first served as Associate Professor and developed new educational technologies. He was then appointed Deputy Director in charge of studies, before becoming Director of the Institute in 2007. Since 2008, Jean-Michel Nicolle is Director of EPF Graduate School of Engineering, which nowadays welcomes more than 2400 students (including 36% of female students) on 3 campuses in France.

Through his various functions, Jean-Michel Nicolle contributed to the development of several training centers in French-speaking African countries.

Jean-Michel Nicolle is Knight of the Orders of the French Legion of Honor and of the Academic Palms. 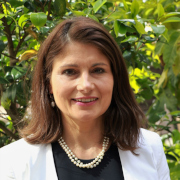 Henriette Geiger is the Director of Directorate People and Peace in the Directorate General for Development and Cooperation of the European Commission (DG DEVCO), implementing the European Commission’s development cooperation on human development including migration, security, gender equality, human rights, education and health. Previously she served in different positions as Head of Unit in DG DEVCO, responsible for bilateral development on cooperation with Asia, Latin America, the Caribbean and Pacific. In the European External Action Service she was responsible for the political dimension of the EU’s relations with the Horn of Africa, East Africa and the Indian Ocean. Before joining the European Commission, Ms Geiger held positions in the European Union’s Council of Ministers, the United Nations General Secretariat as well as the private sector and NGOs. Educated in both Germany and the United States, she obtained two master degrees in social sciences and earned a distinction as Fulbright Scholar.

Professor Noureddine Manamanni has been Director of the Department of External and Institutional Relations of Campus France since 2016 and is the current Secretary General of the Campus France Forum. He is in charge of the supervision of four major activities within the department: international mobility programmes of the French government and public entities; the « Bienvenue en France » Label, European projects; higher education and research promotion: academic publications and tools for students and researchers and the Campus France Forum, bringing together 376 HEIs.

Noureddine Manamanni joined the University of Reims Champagne Ardenne as an Assistant Professor in 1999, where he has been a Full Professor since 2006. He was Vice-President of the university in charge of international relations from 2012 to 2016. In 2013, he was involved in the creation of the national network of international relations Vice-Presidents of the CPU (Conference of University Presidents), which he chaired from 2013 to 2016. Noureddine Manamanni is an engineer in Automatic control and holds a PhD in Robotics from the Université Pierre et Marie Curie (UPMC) – Paris VI. He led the Auto Research Group in control and Hybrid Systems at CReSTIC Lab (2011-2016). He has also been the holder and head of the EEAII Master’s degree programme (Power electronics, Electronic, Automatic and Industrial Computing) at his university (URCA, 2007-2012). He has been a member of several councils and involved in several IPC. He has published more than 170 journals, book chapters and conference papers. 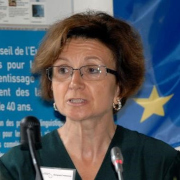 Fiorella Perotto is a Senior Expert and Policy Officer for Africa at the European Commission, Directorate-General for Education, Youth, Sport and Culture, in the International Cooperation unit. In the same Directorate-General, she has previously been Deputy Head of the “Strategy and Investments” unit and of the “Multilingualism Policy” unit, as well as Project Officer for School Education. She has also worked for the European Commission’s Directorates-General for Environment and for Budgets, and for the Council of the European Union.